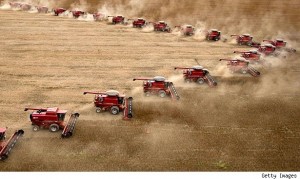 Since World War II, the U.S. has been hailed as the world’s breadbasket, pumping grains and meat from its fertile heartland out to the world. But another country is snatching that mantle away: Brazil.

In 2001, Brazilian agricultural exports totaled $16 billion, according to USDA analyst Oliver Flake. By 2010 exports had climbed to a record $62 billion and reached approximately $80 billion in 2011.

That represents an increase of 400 percent over 10 years. Comparatively, U.S. exports rose about 175 percent over the same period, Flake says.